To all you uni students, interested onlookers, and folks who thought those medieval guys seemed like a good laugh, hi! Welcome to our little group of medieval superfans- hope you like it!

A few of you are possibly wondering what on earth you’ve got yourself into! So, editorial team Siarlot and Barnie (that’s us) have teamed up to answer a few frequently-asked questions, and offer our own hopes that you come to love this hobby as much as we do.

What the hell is this thing? What have I signed up for?

As a society, we do medieval historical re-enactment, primarily focusing on 12th and early 13th century Britain. This means combat displays, fighting with steel weapons and hundreds of combatants, making the gear that we wear and use to portray our period on encampment, and learning skills, trades and displays appropriate to the era. It also involves plenty of after-hours socialising down the pub, of course!

So if I go to this session I’ve signed up for at the weekend, what can I expect to be doing?

It depends! Generally, there are two types of session – combat and crafts. At combat sessions you’ll be outside, learning how to fight with the weapons of our era. To start with, you’ll be using wooden weapons (we call ‘em “wasters”) to learn how to fight safely, but after a while you’ll move on to fighting with blunt steel weapons. Combat is all competitive, skill-based and extremely good fun! You can even have a go at archery if that sounds like something you’d fancy.

Craft sessions are a bit more variable, but generally cover learning the different skills that go into manufacturing kit and portraying a medieval encampment. This includes everything from drapery to woodwork, and we’d encourage you to give as many different skills as you can a try, to see if there’s something you particularly enjoy.

Oh. So how big is this whole “re-enacting” thing anyway?

All our cell groups, at universities and towns across the UK and beyond, are part of a wider society called Historia Normannis. In total, we have about 400 active members, and growing every year. We have a website/society zine (that’s us!) covering all manner of topics relating to Normannis, and a variety of groups to share skills and knowledge. Different groups meet up regularly throughout the year for regional meets and training sessions (combat gets even more fun with more people!), as well as shows, and you’ll quickly find yourself welcomed into our big, slightly dysfunctional family.

Above: The current UK cell groups

Is the combat safe, with all those big steel weapons?

We take safety seriously – we like our members to get back up again after a fight! All combat is overseen by at least one training officer, and everybody starts out learning to fight with wooden “waster” weapons until they’ve learned to pull their blows safely and avoid striking vulnerable parts of the body – the head in particular is never a target. Only when you’ve been trained and tested will you move on to steel weapons – and we blunt the edges of those to reduce the risk of any damage. Accidents do happen occasionally, and a few bumps and bruises aren’t uncommon, but serious injuries are extremely rare. 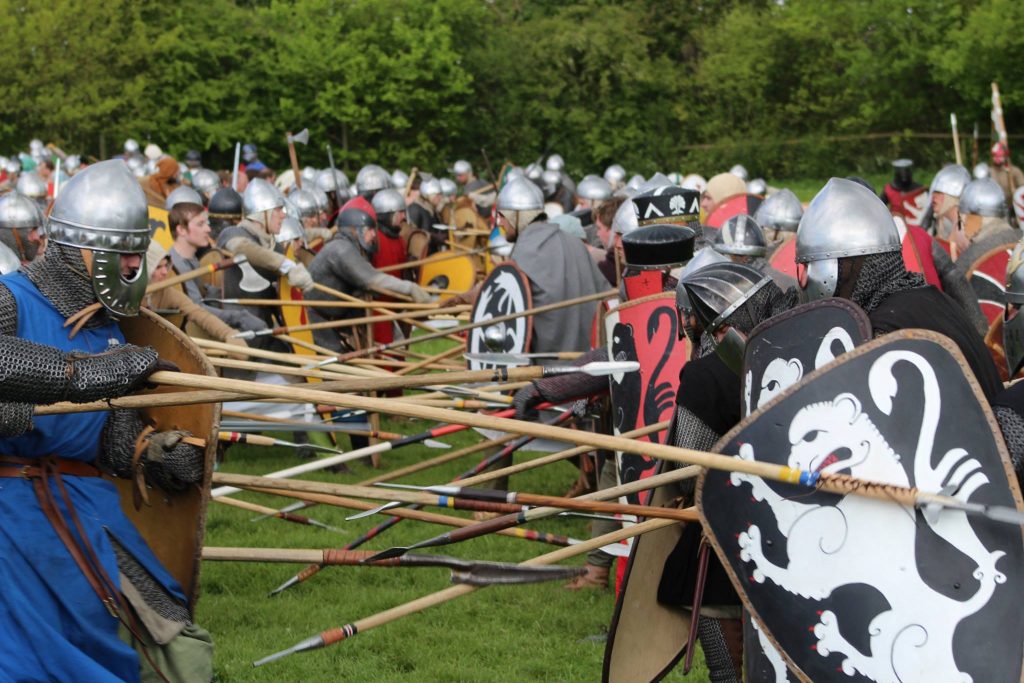 I’m still not sure the combat is for me. Can I skip that part?

Nobody has to do combat if they don’t want to, and many of our senior members don’t fight at all. Our non-combatants are great people, and are a crucial part of doing what we do. (We’d probably starve without them, for one).

What kind of crafting stuff do you do?

Anything and everything: if it’s medieval, we make it! Our craft guilds include drapery, smithing, music, leather work, cooking, woodwork, jewellery, weapon-crafting, weaving, armour-making, acting and scribing… and we keep adding more. If your local group doesn’t have much experience with a particular craft, feel free to get in touch with other crafters via the society Facebook groups, and we’ll be sure to teach you.

I’m not that interested in crafting to be honest. Can I skip that part?

Crafting is a little bit different- because everyone has to have a full set of kit at shows, and you can’t just go to the shop for an authentic medieval tunic, most groups ask that everyone at least lends a hand to help make sure the group’s kit gets made. But so long as you do your bit for that, nobody will mind if you’re not much into the rest of crafting. If there’s one craft that you’re particularly into, most groups will let you focus on that part of kit making. If you’re into leather work, for example, you might prefer making everyone’s belts whilst other folks make cloth kit.

What are these “shows” of which you speak?

Show season is the big highlight of the year! From around May to August, we all travel to castles and historic sites up and down the country to put on displays of our activities to the public, usually on weekends. There are huge combat displays, every craft from blacksmithing to cookery put on show, historical showpieces- all set in some of the most amazing buildings and scenery in the land. And when the public are home, we change back into regular clothes to eat, drink and make merry around the evening campfires. It’s an awesome way to spend a weekend!

So are these shows just crafts and combat? That sounds kinda exhausting.

Not at all! All shows feature a tented encampment where we spend most of our day, where we can eat, chat and enjoy one another’s company alongside the fighting and crafting. Neither crafting or fighting at shows is compulsory; all that’s “required” is that you wear your kit and help keep the encampment running smoothly!
In addition, there’s another branch of the society that specialises in portraying the medieval church. They have some display pieces of their own, as well as some different (and beautiful!) props and kit. Nobody has to join in with this side of things if they don’t want to, but if you’re interested- go for it!